A GENERAL HISTORY OF SOCCER IN PRINCE GEORGE

1) Clicking on the links in the page will direct you to the PG Library Digital Newspaper Article. The article may be titled with Soccer or Football or Association.

2) To see the MENS Trophy winners or the Youth Soccer or Womens Soccer History Please follow the links under “ABOUT US” on the main page.

A Brief History of Senior Soccer in Prince George : from an article by Shafeed Rahman.(1999) – (with updates, photos and early history by Terry Carter, the PG Library Newspaper Archives and the Exploration Place Historic Photo Repository)

“Like many communities throughout British Columbia, Prince George’s sports heritage owes much to the immigrants who brought their passion for home grown games to a new land and a look at the rich history of soccer in Prince George proves this. The game of soccer in PG can be traced as far back as the first World War, but neither time nor resources were available to do justice to the early years of soccer here.
I am indebted to two PG soccer legends, Hans Niedermayer(deceased) and Jim Briggs(deceased) who gave some interesting accounts of soccer over the last four decades, the good, the bad, and the ugly. Gratitude also to Gaetano Mauro and Nick Rukavina for their assistance, and I regret that I wasn’t able to interview John DaSilva(deceased) and others who played a tremendous role in the development of soccer in Prince George”.  Shafeed Rahman 1999.

The major soccer trophies played for in Prince George start with the Montgomery Shield awarded first in 1913, then came the Perry Cup awarded in 1921 followed by the Jimmy James Trophy (League) in 1955 and the Spaner Trophy (District).

Top
The earliest record I have found for organized soccer in the Prince George area is from May 1912 with an announcement in the Fort George Herald of the Dominion Day Athletic Festivities that included Baseball, Assoc. Football and other field sports. (tc) 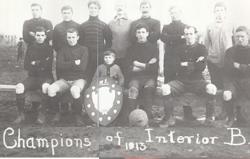 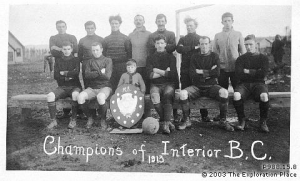 The Battle for The Montgomery Shield  -1913
The Photo on the left of the Fort George Nechaco team was found by Noreen Rustad  in an old box of photo’s. She in turn passed it on to Lino and Kathy Nadelin . Kathy and Lino in turn passed it on to me to see if I could find out anything about it. The photo on the right taken by the same photographer but minutes apart, is from the Exploration Place Collection
Mr Neville Montgomery was a Barrister and also operated a jewelers store in the townsite. He donated both the Shield and medals for the winners in 1913. This Shield was played for till around 1932. (tc)

1913 – Nov 1st – Report from the Fort George Herald
“The Montgomery Shield, coveted trophy for football players, was won last Sunday by the Fort George team by a score of 1-0. Throughout the game the local boys put up a splendid battle for the trophy, but the heavier players from Nechaco townsite proved too strong for them, and in spite of the excellent play of the local team were unable to score. Murray, for the Fort George team, played a splendid game, scoring the only goal. Both teams played for all that was in them, and without a doubt was the fastest event on the football card for the year. This was the first sporting trophy that has ever been won by the Nechaco town in competition against South Fort George.”

Top
“Just as popular then and now, is the best game in the world, soccer. Even in the rough colonial town of Prince George, the British game has many followers.”
Excerpt from the Citizen History, August 1958 (photo)

1921 March 25th  – A soccer league is formed,
The Prince George Football League, with 3 teams and is a rousing success. Great War Veterans Assoc. (GWVA) Plus 2 others from “The Cache” 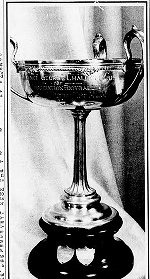 “The Prince George Challenge Cup for Association Football, presented by H.G. Perry Esquire, MLA 1921″ (tc)
The Trophy, first presented in April 1921, went missing in 1928 till found in 1949. Then disappeared again until turning up in the local dump in 1968, where it was rescued and restored to its place of honour. The solid silver trophy is still presented to the Top Division playoff champions. 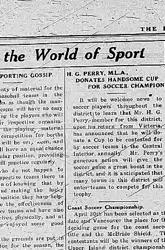 1928 May – H.G. Perry donates medals for a tournament in McBride. 1 team from McBride and 3 teams from PG participate. The Cubs and CNR play a game where the railway boys won by a score of 3-1.

This seems to be the last mention of the Montgomery Shield. tc 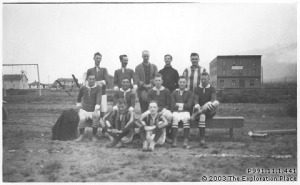 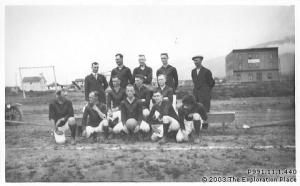 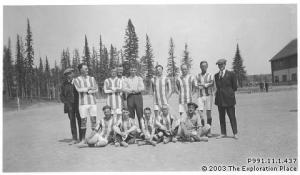 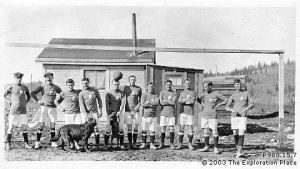 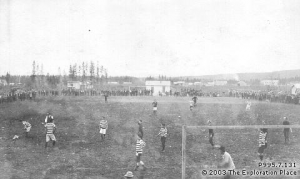 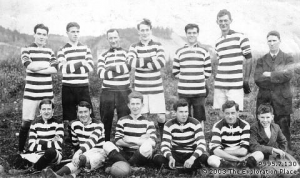 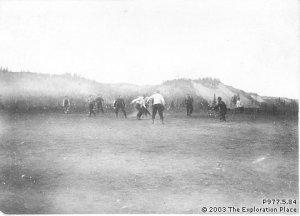 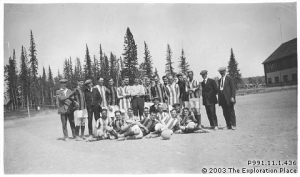 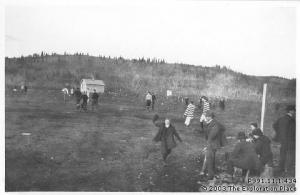 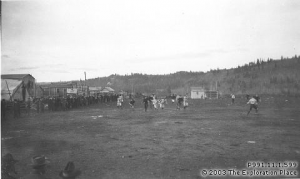 1949 – June 2nd PERRY CUP recovered and being played for again.

No records found for the War years.

Top
“Just as popular then and now, is the best game in the world, soccer. Even in the rough colonial town of Prince George, the British game has many followers.”
Excerpt from the Citizen, August 1958 (photo)

1956 – May 20th – Vets meet Bay at 3pm.
The Legion “Vets” Team take on Hudson Bay at Connaught Park on Sunday followed at 4:30pm by a game between SC Germania and Inter. 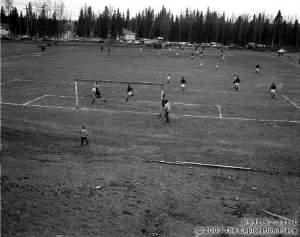 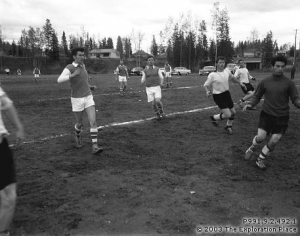 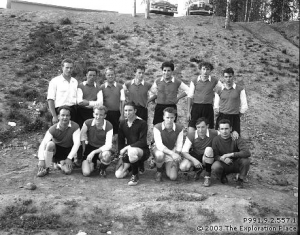 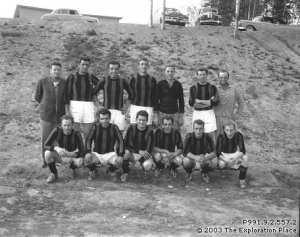 PG Rotary Club helps to establish a permanent field for soccer at the old track and field grounds.

1966 – The North Cariboo Soccer League forms, but BCSA refuses to register the league as it was “…too troublesome.”” In the seasons 1966 to 1970, the game was almost entirely played by immigrants who formed teams of similar ethnic groups. This, sadly, led to emotional outbursts related more to national pride than the game of soccer and trouble was a frequent bystander at our games. As a result the league was rarely completed and visits to courtrooms were not uncommon.” – unknown former player
” It was ugly in the beginning. We had all ethnic teams and there were fights every game. The police even had to come out and oversee the games. But then we got some organization and proper referees and order came about.” – League ref and pioneer John DaSilva
1966 May 9th – Soccer season kicks off

1975 May 5th – Olympics “take it on the chin” in season opener, Jim Briggs in the groove(photo)

1976 May 5th – Labatts, Olympics and Quesnel open season with wins

1979 May 7th – Labatts surprised by Croatia in opening game

NCSL joins BCSA, as it leaves behind it’s rougher past and becomes a stronger league with teams from Fraser Lake, Quesnel, and Mackenzie.

Original clubhouse is built in 1975 with a contribution of $32,000 from the City, and a grandstand is added later.

The Vancouver Whitecaps, under coach Tony Waiters, play exhibition games here in 1977 and 1979 to sold out crowds. Hans Niedermayer is instrumental in coordinating.

1984 saw only 3 teams in the league, and the final was suspended due to violence.

The NCSSL and the Mens Recreational Soccer League amalgamate and stabilize, and a women’s league(PGWSA) is formed.

Vancouver Croatia play an exhibition against the PG Selects, coordinated by Vince Buljevic.

PGYSA enrols over 1000 players for the first time

Plans are initiated for a new soccer complex for the league.

1989 1st and 2nd Divisions established in the NCSSL

Youth complex is opened by guest of honour Tony Waiters.

Construction of the NCSSL complex is completed, spearheaded by Glen Thompson, and is officially opened on May 29th, 1998.

After nearly a decade of planning and construction, the new NCSSL Clubhouse complex with three fields was opened on May 29th, 1998 at a cost of $750,000.
Glen Thompson oversaw the project and had one of the fields named in his honour. Glen also earned a B.C. Soccer Association special recognition award for his work on the project. Field #2 now has a full set of floodlights on it.

2002 Lights installed on field 2 at the NCSSL Fields

2002 3 intrepid players from the NCSSL, Alf Mills, Richard Ryan and Terry Carter, packed their bags and headed to New Zealand to play in the World Fun Cup with the Calgary United Team. Resulted in a Win for the United Team.

August 2009 NCSSL and PGWSA host the BC Soccer “B” Cup

2017 After 12 months of preparation and organization the PGWSA and the NCSSL presented their respective members with an opportunity to decide the future of senior soccer in PG. A special resolution was presented and a vote took place during the week of August 21st to 24th to Amalgamate both the mens and womens soccer clubs into one organisation. The resulting votes were tallied and an overwhelming majority by both clubs resulted in a YES vote for Amalgamation. The process now begins to bring the the two clubs Constitution and By-Laws together.

May 2018 Saw the full amalgamation between the NCSSL and the PGWSA completed and the Prince George Soccer Association(PGSA) was formed.

Because these cookies are strictly necessary to deliver the website, refuseing them will have impact how our site functions. You always can block or delete cookies by changing your browser settings and force blocking all cookies on this website. But this will always prompt you to accept/refuse cookies when revisiting our site.